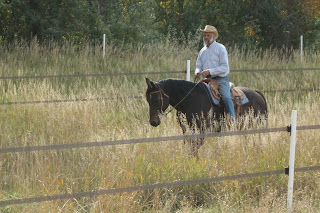 I know there is only one person who reads this who is interested in horsemanship, so this is for you, but I have to write this down for my own record too. Today was good!
I set out knowing that my horse thought his job was to stay in halt and make the minimum of effort when he was asked to move. He had been taught that by all his previous experiences. My job was to explain to him that in fact that was no longer his job - his new job is to go when asked at the speed he is being asked to go. 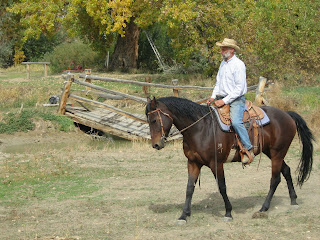 First we worked the cows and if I had been at home I wouldn't have used Zuni for that job, not right now anyway, because I had to ask him forward sometimes and then I couldn't back up my ask because of the situation with the cows. A couple of times I did feel Zuni flow forwards, but a lot of what happened was confirming to him that he was getting it right to be hesitant about the forward.
But anyway, in the afternoon I got out there and gave my all to have a good last session. Mark, as usual, was there to back me up, and quite quickly I could feel Zuni start to think about the possibility that the new job might be the way to go. The feeling I had begun to feel last night was still there just right there, right under the surface. I felt the door begin to open and I was in there ready to go myself. I was amazed at how quickly the change happened - I felt the walk loosen up, and then the jog, and then he just started to speed up. Almost straightaway we got into a real lively trot and I could feel the canter right there. I didn't hold him back, but I didn't encourage him either, because I wanted to set him up nice and soft in walk and trot before I went for the canter. Again it was mindblowing how easy this was - in minutes I was walking and trotting him round the field, nice and soft and rounded up. 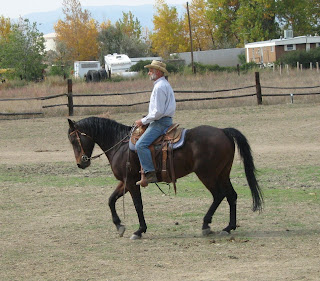 I knew he would canter if I asked him too - how different this was to the horse I was with four days before. Now, I know that horse had cantered not long ago, but not because he wanted to, at least I don't think it was anyway. But now he definitely wanted to, so I went for it and away we went. Wow, what a horse, so soft and comfortable. I cantered him about five or six times here and there around the place - every time he was ready to go when I asked him. The afternoon was over and I was so happy with my horse. 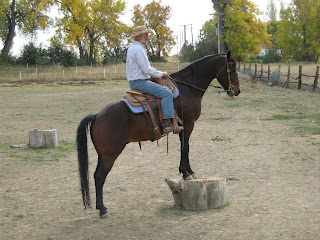 I guess many people could have done that job in a quarter of the time, but I was chuffed with the work I had done. Zuni was happy too - now he knew what his new job was he was only too ready to give it a try, and my oh my, he was pretty good at it too. I would have liked another week to take him on from there!