We set off from Loveland on our journey to Harry Whitney's place in Salome AZ. We have eight days to get there and our first stop was Wholefood Market in Fort Collins. Now, this place (WM) is beginning to feel like home for us - it's safe, the staff are cool, it serves good coffee, and sells all the organic supplies you could ever need. We stocked up for two weeks cos the next store we get to is after Harry's, in Phoenix. We then drove to Estes Park which to put it politely was a bit like visiting Cheddar Gorge x 10, or Widecombe in the Moor x 100. I briefly looked for a bumper sticker I want to buy, without success - it says, 'I am trying to listen to your point of view, but I can't get my head that far up your arse'.
Then we met up with Wolf and his girlfriend Nicole. Wolf is a friend of my character in Secondlife, so meeting his real life character was always going to be interesting. When I first entered the Secondlife world, Wolf was the first person I met, and we became good friends. We had many great chats about philosophy, culture and so on, subjects I know little about but love talking about. We even had a mighty fall out over Rosie, who was a mutual friend and was later to become my SL partner. Our friendship survived that, but we never really rekindled the old days as they were.
But it was great to meet up, and now Wolf has got himself a pretty girl in the real world, and she's into wolves too. Somwhere miles back on this blog, there is a post about Wolf if you are interested - he is a therian which basically means he relates very strongly to wolves. While we were with him he showed us this wolf skin he is saving up to buy right now.
So we said goodbye to Wolf and climbed into bed, exhausted by this holiday, and desperately needing a few relaxing days. 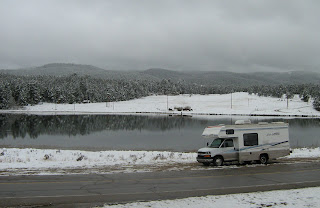 When we woke up yesterday morning there was snow on the ground. The mountain pass we were planning on driving over was closed for the forseeable future. So we set off south to cross the Rockies at a more hospitable place. On the way we called in at a small town called Lyons, for our morning coffee. The coffee shop was really cool - run by old hippies for old hippies. I don't know if it's just around the Boulder area or what, but there are so many old freaks around the place - far more than in UK. In fact I would go as far as to say that in UK most of the old freaks, including myself really, have kind of left the image behind a little. Here they are hanging on to their pony tails - I kinda like it like that but no way would I go back to it myself - it's got to be eight years since I bought my horse shears and felt the joy of not being pigeon holed on sight. 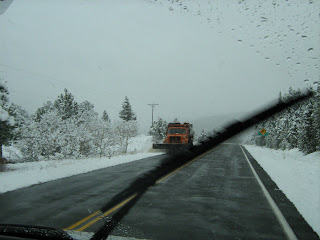 We drove for miles through the snow and eventually reached the I 70. And on and on west to Glenwood where we pitched up on a site without wi fi, grrrrrrr. So this post should have been up last night and now I still have to write about today and I am really tired so maybe I'll have to leave it to the morning. Suffice to say that it has been a good day, and I have near as dammit completed my shopping - you should see my cool new boots (actually they are the plainest I could find but boy they are comfortable with it). Just shopping for the family to go now - I may have to resort to Grand Canyon mugs.