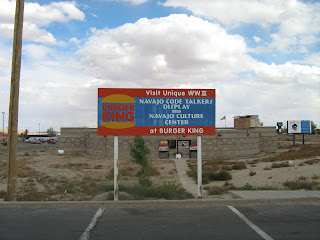 We set off early this morning to try to break the back of the journey south. Sarah took the first go driving and got us to Monticello but we couldn’t find a coffee house anywhere. Some of these small towns have to be seen to be believed – they are so scruffy and look like they have been dumped there without a care. There just isn’t anywhere in UK like that anymore – all available space is taken and is worth serious money, and is consequently either tidy or being tidied. In England you couldn’t really find just acres of land with rusted out cars, falling down shacks, collapsing mobile homes and piles of industrial junk sprawled all over it. Someone from up North is gonna come on now and say, ‘have you not seen the wasteland behind Safeway’s in Bolton?’ 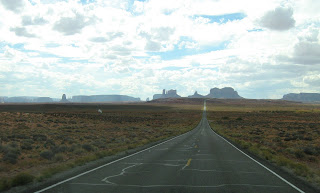 So my turn to drive and yes, you guessed it, more red stone. Sarah was loving it clicking away on the camera at all the ‘amazing’ natural phenomena. I couldn’t get my mind of the 400 plus miles we still have to drive to get to Wickenburg, so we sped along pretty fast. We soon entered the Navajo Nation and found a smart café/gift shop where we had lunch. 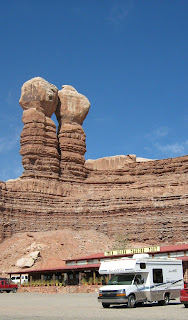 This was my first meeting with the Native American people, and I found the whole thing very emotional. Since I was a kid I always supported the Indians against the cowboys or the military, and as time went on I realised my instincts were correct. And now here I was in their territory, or at least the land we left for them after we took the best stuff; and man, I just felt ashamed to be a white man. Now I know this is bollocks because it wasn’t me that crapped all over them – logically I know that, and I know I never would either, and this interests me, because this is just another example of how logic and life are often away aways apart. But seeing those guys made me want to cry, not because of their sadness or anything like that – as far as I know they don’t give a shit – but I wanted in some way to try to make it fair – I know it can’t be done, and anyways, who says life has to be fair. So this is me here right now recording my emotions on meeting with the Native American people.

This dichotomy between logic and reality came up a lot at the weeklong clinic we just did. There was quite a lot of very logical ‘life’ advice, and me just thinking, ‘man, it’s all very well to say these things but they are not so likely to be matching up with what the person your talking to is experiencing’. Stuff like, what is the point of worrying about tomorrow - well anyone knows the logic of that, but don’t tell me you never do. Or if your girlfriend leaves you and someone says, ‘well she’s gone now, just move on’. Bollocks I say to that, that’s about as much help as nothing – in fact it’s worse than nothing in my opinion. It’s just a trite excuse to avoid giving some love and support that might actually be of some help. As you can see I’m on a bit of a mission against the self-improvement brigade – they’re beginning to seriously do my head in.

We drove on and came across an old fort built by the Mormon crusaders in the 19th century, as a base from where they could fan out into the area. It was a cool place and they seemed to be good people. I’m not so sure I would have wanted them on my patch if I’d been a Navajo though. The photo below is what the Mormon's travelled in - today of course they mainly use Ford Zetec's. 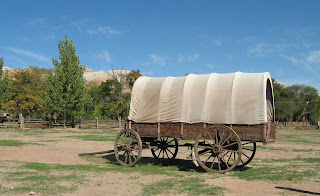 And then we landed up in Tuba City. Phew, what a scruffy shithole of a place! But maybe things are changing. There seems to be lots of building going on and hopefully incoming money will get things going for these guys. The whole Indian thing all seems a little desperate in some way. I know this sounds corny but it almost looks like they haven’t ever recovered from having the crap beaten out of them in their recent history. Maybe I’ve got that wrong, but the whole territory is littered with falling down shacks and scruffy settlements. There doesn’t seem to be a ‘tidy up the place’ gene in the mix somehow. Maybe they just aren’t meant to live like this.
Posted by tom909 at 8:43 PM