This is a picture of Harry riding a young mustang. It settled down almost immediately when Harry got on – he makes it very simple for the horse.
. 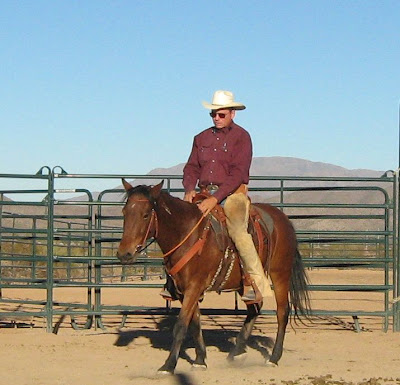 Day three at Harry’s and what can I say. I am actually quite confronted by how much he can get done with so little physical effort. Harry is quite willing to get in there and work with the students’ horses. Sometimes he volunteers and sometimes they just ask him to and he does. It is great watching him work – like something out of the old days, a bit how I imagine it must have been watching the Tom Dorrance or Ray Hunt (obviously I’ve not seen either so this is definitely in my imagination only). When he rides he talks what he is doing – it is just incredible. The horses love his clarity – he makes them feel so good.
When students ask questions the answer is so often, ‘well maybe, or maybe not’ - not those words but the sentiment of ‘well it depends on so many things’, prevails. It’s funny because I can see some of the students desperately looking for technique and formula, but boy it’s not really there. Not to say Harry isn’t effective, because he is very effective indeed. A lot of the actual horsemanship is almost identical to Mark’s, but it is presented to the students in a different way. Mark is way more workmanlike and ‘get the job done’, which I really like, but Harry really emphasises the importance of the way it looks to the horse too.
The clearest thing to come across, and the thing I really want to take home with me, is that the horse’s feet follow his thoughts. Direct the thought and away you go. Watching Harry set this up on the ground and seeing the horse begin to work in this way, you can really see how this could start to come through in the ridden too. The horse starts to look for the thought you want instead of the threat of what might happen if he doesn’t move – I can see that it could be very cool indeed once it becomes established.
So that’s all the good stuff, well obviously not all of it. But the most confronting thing for me has been all the round pen work that Harry does. I guess because we became so disillusioned with ‘Join Up’ and all the marketing and hype etc that goes with it, we maybe threw the baby out with the bathwater. Not totally convinced by this actually, but it is obvious Harry thinks you can set up changes in the pen that are useful for you and the horse. What Harry does is nothing like Join Up, but he does get the horse following the owner, and actually today he sorted out a ‘draggy’ leadrope problem in this way. It took a long time but I can see that it was quite effective – there was no doubt the horse changed its mind about things and kept up with the handler no problem after the session.
I must say I am not so sure about doing loads of groundwork, which all the students seem to take as read that has to happen, but some things I’ve seen this week have been really good. Watching Harry get the horse to do small circles on the leadrope was excellent, and as I have already said, the ‘following the thought’ stuff was brilliant too.
Loads of good stuff really, could go on and on. If any non-horsey readers are still with me, well here is something for you. Me and Sarah are still together and still love each other Awwwwwwwwwwwwww. Yuk how sick-making!!!!
Posted by tom909 at 2:50 PM