The last few days have been full on American - it's been fun.
We left Harry's and drove to Kelly and Brian's. Kelly is the girl in charge of my avi's second life partner, Rosie. We met up face to face a week ago and kind of got to know each other a bit, but actually we knew each other quite well already - we have been partners in Secondlife for over a year. I don't know if I mentioned it before, but for some reason I assumed Kelly would weigh at least 20 stone - see a lot of secondlifers have these really hot avis to make up for themselves not being so hot in Real Life (not me, of course). In fact Kelly turned out to be one of the smallest Americans we have seen. Not only is she a normal size, she is a normal person (I get the feeling sometimes that that is unusual for second lifers). We, that is me and Sarah, and Kelly and her husband Brian, all had a great weekend.
. 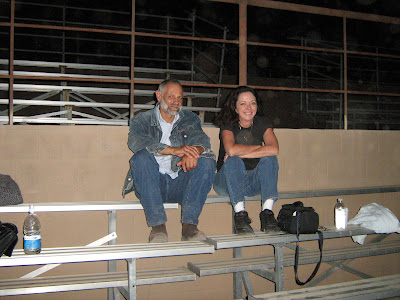 Me and Kelly - see, we're normal

So much happened this weekend, so I'll just cover the highlights for now - the in depth psychological stuff between me and K and our avis will be appearing shortly in the book I am currently writing about my year in Secondlife.

My favourite bit of the weekend was watching an American football game on telly from beginning to end - it lasted four hours. It took me about half an hour to suss the rules but once I got into it, it was really quite exciting. We all trooped round to Brian's son's house to watch the game and it was doubly good because their team, the Arizona Devils won. 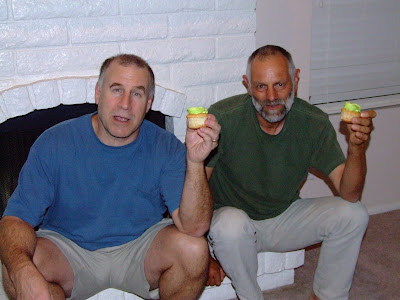 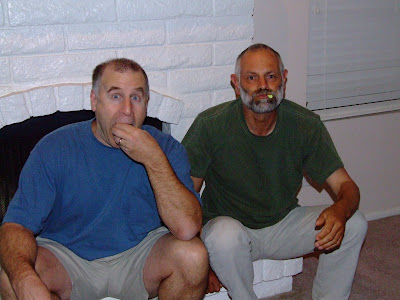 Me and Brian watching the game
The previous night we had attended a full on American halloween party at the same house. This included me and Sarah both wearing fancy dress (no photos available as yet, but see artists impression below) and for me, consuming vast quantities of beer and jelly shots (some form of alcohol in lumps of jelly - really easy to eat but quite intoxicating).

I have got quite fond of the American people on this trip. They have made us very welcome and actually, even though their culture is obviously completely and ridiculously consumerist and totally unsustainable, I think the wealth and the vast spaces they live in does give them a bit of a feeling of lightness and freedom. We have mainly mixed with the wealthier middle classes and we haven't been near the cities, guess there we would see a different story. The party was unbelievable - about 100 guests all in over the top fancy dress, and the house was decorated beyond anything I have ever seen. There was an artist to do our portraits, a DJ, a free bar, stacks of food, and as far as I could tell, absolutely no dope at all (when I have a few drinks I always revert to my old ways and crave a smoke or two later in the evening).
. 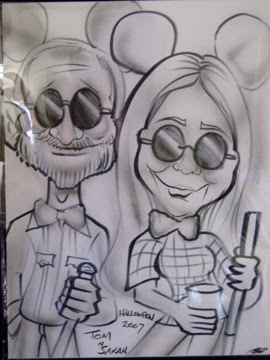 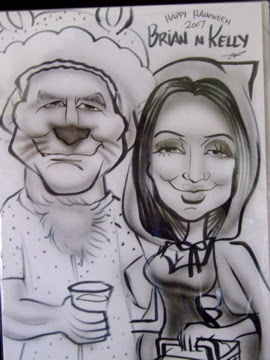 .
I spent quite a lot of time talking, or maybe listening to a 'nail technician', the most fast talking person I have ever heard. In the end I had to get her to practise her english accent to slow her down enough for me to understand her. We also had a nice chat with Brian's daughter Jenny and her husband Mathew. Mathew is a philosopher, or should I say that is what he qualified as, and he is in the process realising that there aren't so many vacancies for philosophers right now. Anyway what I am getting to is that the conversation gave Sarah the chance to throw in her only philosophical quote, 'life is nasty, brutish and short', correctly spotted by Mathew, as having been an observation of the seventeenth century philosopher Thomas Hobbs.

And yes, we also went to Walmart. And now I am going to tell you why we are coming home from America in three days time - cos I don't want my sweet wife to end up looking like this.....
. 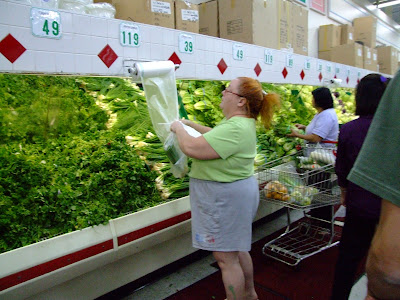