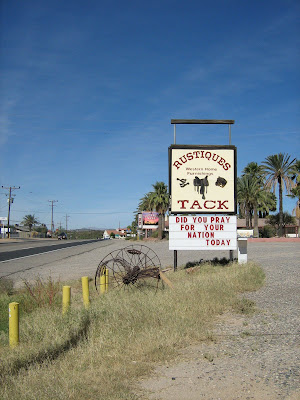 One thing I have learnt about working with horses is that it works better if you don’t worry about what might happen. If you really want to see this philosophy in action then take a trip to a rodeo – these guys have balls. When they lower themselves down onto the bulls in the bucking shoots they know they are going to be chucked off. They know even if they last the eight seconds they’ve still got to get out of there somehow – it’s a high stakes sport.

So the guys riding in the rodeo, probably more than anything I’ve seen so far, represent America for me. We’re not going to ‘talk this through’, we’re not going to consider the consequences, we’re just going to go for it. On our journey from Colorado through Arizona I have spent a lot of time thinking about how all these people ended up in this country. Over the last 300 years all the white guys streaming over the Atlantic to the east coast and spreading out over this vast area looking for opportunities to make a living. Little homesteads everywhere, mining towns, mountain passes, railways, settlements in the middle of nowhere – it’s a fantastically rich history all crammed in to a very short time.

And when the white man got here he only found out that someone was already here. The native Americans had this place working pretty well up till then – they must have got quite a shock seeing these desperate whiteys pitching up on their patch.

All my ideas of the history of the USA have come from the movies, so they’re probably pretty wide of the mark. But just meeting the people you get a picture of a fairly unsettled past. Pretty much everyone you meet is only too ready to tell you their history – half Irish, half Scottish, Scandinavian, Italian. Then there are the Black guys who I have hardly come across on this trip through the mid-west. And then there are the Indians – I only talked to one so far and he was trying to blag me for $8 to help get his wife and kids back to Albuquerque – I just bullshitted back to him as hard as he was bullshitting to me, but I watched his next client shell out what I guess was a $10 bill. And now there are the Indian Indians who have moved in on the motels and the convenience stores. For sure it is a multi-cultural society and I love that part about it.

One girl from the deep south was telling me about a phone call she had from her mother last weekend. ‘Well honey, do you know on Sunday a black came into our church. I got up and left, of course’. But generally speaking, at least around where we’ve been, they’re all getting along not too bad.

One thing that draws a lot of these people together is the horses. A lot of the rodeo riders are Indians, and a lot of the spectators are too. And at the second rodeo we went to in Salome there was a long line of Mexicans up against the rail, all the same size, about 5’ 6”, and all wearing base ball caps, and all with moustaches. I missed that photo, don’t know why.

And through it all is woven this really crackpot idea that somehow this is God’s country, and Jesus is looking after us all and so on. Don’t get me wrong, I have no problem with god – I actually believe in god myself, not the god most of these guys are envisaging, that’s for sure. This absolutely bizarre idea that America, the nation, is some special thing on this planet – where the f*** did that come from? When you listen to the prayers at the beginning of the rodeos its almost pathetic some of the stuff they are saying. Praying for ‘our boys out there in the middle east, fighting for freedom, so that they can come home and enjoy the rodeo, like we are privileged to be doing right now’. Were they always this bonkers or was it the twin towers that sparked off this crazy jingoistic crap?

Don’t get me wrong, it’s not everyone, and even those that are caught up in it are nice enough people. I hope I’m never going to let stuff like that stop me from enjoying someone’s company. Funnily enough the only two times I really had to walk away from anyone in my whole life were when I ended up talking to religious fanatics. One was a fundamental christian in a tiny town in Wales, and the other was a fundamental muslim on a pavement in Manchester – I couldn’t find the heart in either of those guys.
Posted by tom909 at 9:20 PM