An Englishman’s guide to Rodeo (from a sample of two) 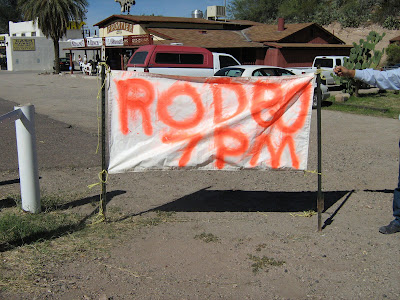 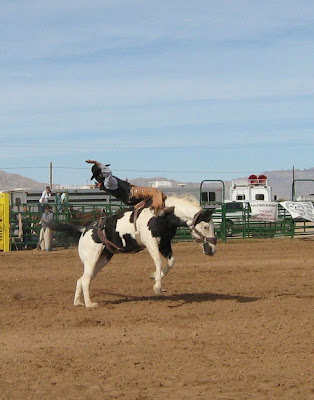 This is some event – I never realised about the bucking strap – it is quite tight around behind the horse’s belly. As soon as either the rider gets bucked off or the eight seconds is up, these other two guys ride in and get the strap off as fast as they can. It’s impressive riding. Their job is also to go in alongside the bucker and allow the rider to grab them and pull himself to safety.
So how do you stay on these fearsome buckers – well it seems to me that these guys hold on real tight to the girth strap and somehow, god knows how, keep their centres of gravity right with the horses. They lie back along the length of the horse and hang in there. They get extra points for raking their legs along the horse to try and get extra bucks out of him.

Well, if I got a shock with the bucking strap I got even more of a shock with this event. This little calf runs out of the pen and the rider chases it, lassoes it, it kind of gets mightily jerked over backwards. The horse just stands holding the rope taut while the rider gets off, grabs the calf and ties three of its feet together so it can’t move. The whole event is timed and the winner is the quickest to get it done.
Breakaway Calf Roping 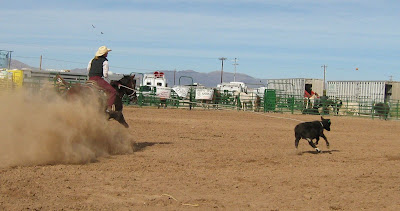 Pretty much the same event except it’s for the cowgirls. The calf runs out of the chute, gets chased and roped and then the rider stops and a string breaks to release the rope from the saddle horn. Again quickest time is the winner. 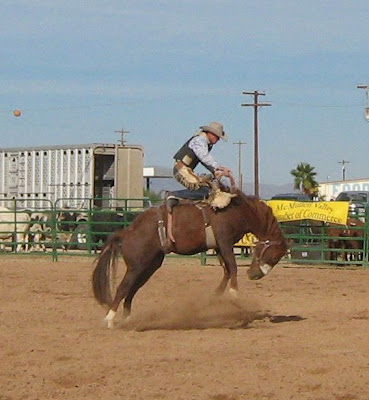 I really enjoyed this event because generally speaking, the guys managed to stay on and give a bit of a show. It’s the same as the first event but with a saddle. And yes, the bucking straps were there too. For any over-sensitive limeys in the crowd, the MC did explain hat these horse’s do eight seconds work a week, and I am going to add to that, some of them are damn good at their jobs. There is a real feeling of respect for the really good buckers. To win the competition it really helps to get a good draw. A horse that helps you give a good performance is the one to ride – It’s more about performance than staying on.

All the kids under twelve get in the ring and they release five calves with yellow ribbons on their tails. Any kid who gets a ribbon wins $5 – They’re keen! 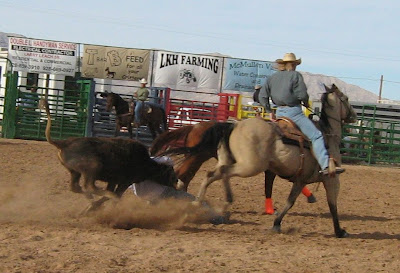 They say this is one of the most dangerous sports. There are two guys working together – one is a hazer who keeps the calf in line and the other is the catcher. The catcher has to ride alongside the calf, grab the horns before he dismounts, and then get off the horse and turn the calf over. One thing is for sure, it ain’t easy. Only about three guys out of the entry succeeded, and it was damn difficult to get a photo of too. 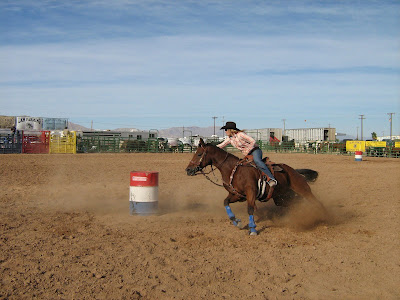 Another event for the cow girls and hell couldn’t they ride. Timed with an electronic timer they rode round three barrels in a clover leaf formation. Amazingly out of a dozen riders they all timed in with a couple of seconds of each other – I think the winner’s time was 17.1 seconds.

The calf comes out of the chute and one guy ropes the head and the other guy ropes the back legs. I was stunned by the first one I watched (have to say subsequent ones weren’t quite so dramatic). This calf was just running along and suddenly it was suspended mid air between these two ropers. God alone knows how it survived – if that had happened to me it would have broke my back. 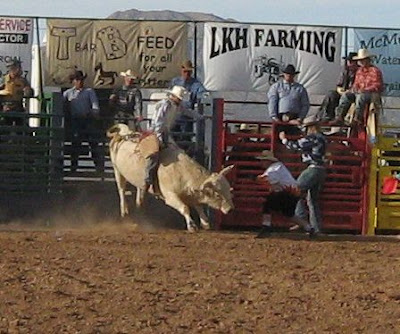 Yes, what we have all been waiting all evening to watch, and boy, this is exciting stuff. Basically mad people getting on mad bulls and trying to stay on for eight seconds. Success rate – very low. The bulls are fondly described as each rider prepares to go. ‘No-one has stayed on this guy ever’, or ‘champion bull at the National Rodeo’ etc etc. One pair was described as the pairing we have all been waiting for, the champion bull with the champion rider.
The one that no-one has ever managed to ride took about two seconds to get rid of his rider – it is fearsome stuff. One bull ran right across the ring and chucked the rider into the fence right by us. He did his eight seconds but got up and looked like he had no idea what was going on.
Absolutely riveting stuff – I loved it.