This is part one of the trilogy - it's relationships okay, sex and love are coming later. 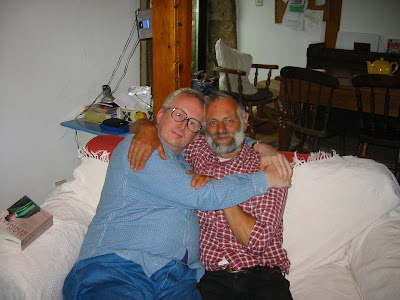 This is a picture of me and my friend Vicus. Some of you may know him from elsewhere. We have known each other for 39 years. We first met when I briefly attended a teacher training college, in the vain hope that I could somehow get a career and be 'normal'. Alas, or perhaps thank god, I realised it would never work out, and three weeks into the course I left. The absolute clincher for me was when this tutor instructed me to pretend I was in a 3' high glass box, and I thought, 'you fucking twat!', and I never returned, except to the canteen where every morning they served a fantastic poached egg on toast.
In the late 60s me and Vicus took acid together on more than one occasion, and generally overdid it with other minor drugs, until Vicus decided a clear head would be more helpful to his search for reality. A couple of years later I reached the same conclusion - mind you that doesn't preclude the odd foray into altered conciousness at family weddings and the like.
What has this to do with relationships - well, it's a relationship of sorts isn't it. I don't like having too many friends - that might be code for 'no-one wants to be my friend so I'll make it look like it's my idea'. I learnt pretty early on that you don't want to be dependent on some other person who's gonna run off with some other sod any time they feel like it. That hurts! If anyone gets too friendly I move. I used to think I was weird - now I know I am.
I don't mind being friends with Vicus, cos he is too lazy to be much of a pain. We never spend more than a couple of days together anyway - he's funny for a while then he gets boring and talks about classical music and fucking authors who I have never heard of.